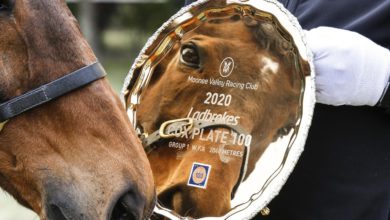 Arguably the best weight-for-age race on turf in global racing.

The Cox Plate is the superior middle-distance test for superior weight-for-age horses in Australia and to those international raiders who dare show their face on Australian soil for this incredible race.

The amphitheatre at Moonee Valley makes for one of the best atmospheres in world thoroughbred racing as fans get to see the best horses in Australia thunder across the finish post twice from the starting position.

It has been a race made famous by many a moment with Bill Collins phrasing two of his most iconic moments; “Bonecrusher races into equine immortality” and ‘Kingston Town can’t win.”

Raced at one of the more quirky tracks in Australia, the Moonee Valley circuit is a tight-turning venue that relies on momentum and rewards those horses who take bad luck out of the equation by racing close to the speed.

She is the horse that is now almost synonymous with this race given her incredible four-peat of wins dating from 2015 to 2018.

The Chris Waller-trained mare surpassed the previous record of three Cox Plate wins set by the mighty Kingston Town who went back-to-back-to-back through 1980-82.

It is a near endless list of famous winners in this race but the most dominant of those would have to have been Dulcify in his 1979 seven-length demolition job of a high-quality field.

The biggest surprise, although maybe not to his trainer and owners, was the victory of the Shamus Award.

The three-year-old colt has not won a race in his career prior to his awe-shocking win in 2013 after finishing third in the Caulfield Guineas.

Two-time winner Fields of Omagh also gained notoriety for his second Cox Plate triumph in 2006 where one of his owners and legendary race-caller Bryan Martin called the event.

Champion racehorse Pharlap was the first dual winner of the event winning the 1930 and 1931 editions of the race.

The 2021 winner State of Rest had to survive a huge protest from the connections of second place Anamoe.

Violoncello took out the inaugural Cox Plate in 1922.

On such a quirky, unforgiving and unassuming track, ‘good’ barriers are one of the biggest factors to winning this race compared to other tracks around the country.

Barrier number six has produced the most success in this race since 1939 with State of Rest increasing that tally to 14 winners with his 2021 Cox Plate triumph.

Barrier number seven is the next best with 10 winners jumping from that gate in the last 81 years.

History says that drawing from barrier one two barrier seven is where you need to be with 58 of the last 80 winners coming from those barriers.

Lyx Gracieux defied that trend in 2019 by storming away with the Cox Plate after jumping from barrier 11.

In the last 32 years, statistically speaking, the worst barriers to draw have been 8, 12 and 14 with no winners being drawn in those gates in that time frame.

Since the inception of the Cox Plate, 44 favourites have managed to cross the finish post in first place with the most recent of those being the heavily backed $2.9 elect in 2019, Lys Gracieux.

The shortest-priced favourite in the history of the race was four-time Champion Winx who started a $1.10 favourite with bookies on her way to her 2017 Cox Plate triumph over Humidor.

Winx also boasts the tag for the longest-priced favourite to win the race after winning the 2015 Cox Plate as a $4.6 favourite.

2021 Cox Plate favoritism is currently held by the Anabel Neasham-trained import Zaaki who bolted in with the Group 1 weight-for-age Doomben Cup over 2000 metres.

Mares have a clear statistical advantage in this race having accounted for nine winners in the last 22 winners.

That stat is skewed in the direction of mares due to Winx’s feats. .

The lightly-weight three-year-old colts also seemingly go well in this event having won three times and placing twice with the Caulfield Guineas likely to be the form reference for those horses coming into 2021.

With international horses being thrown into the mix, the lead-up form for the Cox Plate is a concoction of weight-for-age, handicap and set weight races that mix together to produce a winner.

Winx used the Group 1 Epsom Handicap as her 2015 lead-up event, the Group 1 weight-for-age Caulfield Stakes in 2016 and then used the Turnbull Stakes for her last two.

Since her victories, international form has been the best guide for finding the winner.

Lys Gracieux brought along her win in the Takarazuka during June of 2019, while Sir Dragonet took out the Gold Cup at Curragh in Ireland prior to his 2020 Cox Plate victory.

The Caulfield Guineas has thrown up a couple of winners and runner-up placings in recent history.

When is the 2021 Cox Plate held?
Are there any other races on the day?

Most winners or placegetters usually venture off to the Melbourne Cup or get tipped out to the paddock with the Cox Plate being their ‘grand-final’ race.

How To Bet On The Cox Plate