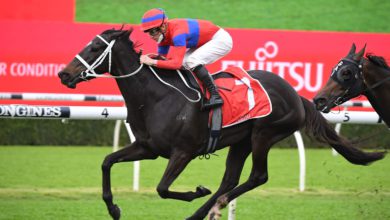 The George Main Stakes is one of the most prestigious mile races during the Randwick Spring Carnival and boasts with a total prize money pool of $1,000,000.

Run at Group 1 Weight-for-Age level, the race is reserved for the highest rating horses in the land and from overseas raiders – who dare travel to our shores.

Originally run in 1945, it was defined as a ‘Principal Race’ from its inaugural year until 1978.

The race gained Group 1 status in 1979 and has remained in that category ever since.

It was renamed the ‘Colgate Optic White Stakes’ from 2015-2019 much to chagrin and jest of punters and racing fans around the country.

It has since returned to its original name as of 2020.

This Randwick mile is considered the toughest mile event in Australian racing with two sharp turns that can undo horses who are trapped wide without cover.

It is the perfect test of stamina as well as speed for the best weight-for-age horses.

The obvious pick is Winx.

Legendary trainer Tommy Smith won the George Main stakes on 11 occasions with Kingston Town (1981, 1982) arguably being his most prolific winner of the race.

Chris Waller has won the race seven times with those triumphs beginning in 2012 with Shootout.

Octagonal’s ‘little boy’ and champion sire Lonhro won the race in 2003 and continued his brilliance in Group 1 races.

Gai Waterhouse continued the legacy of her father in this race by winning the event with star mare More Joyous (2010) ridden by Corey Brown.

Other famous winners include the popular Vo Rogue (1989) as well as Shaftesbury Avenue (1990).

The inside five barriers have provided 18 winners in the race since 1983.

Wide barriers are not the death sentence that they are sold out to be either.

This race has been dominated by favourites since 2010.

Ten favourites have won the race since 2010.

Winx (2018, 2017, 2016) turned this event into a lopsided affair for favourites in recent years as has her trainer Chris Waller.

Verry Elleegant (2020) was a beaten favourite last year but became a winner as the favourite of the race in 2021.

Mares, outside of Winx, have not been endearing to punters in this race during the last two decades.

Outside of that, it has been a male dominated affair and it looks that way again with Zaaki the favourite to win.

When is the George Main Stakes held?

The winner and runners in the race generally use this as a platform for a tilt at the Cox Plate, Caulfield Cup and Melbourne Cup.

It also used for other mile races that occur during the spring such as the Empire Rose Stakes.

How To Bet On The George Main Stakes