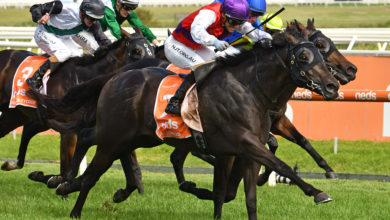 The Group 1 Blue Diamond is one of the premier two-year-old thoroughbred turf events in not only Australia but the world and is set to be run and won again on Saturday February 19th, 2022.

Run over 1200m under set weight and penalties conditions, the Blue Diamond carries with it a purse of $1,500,000 with $900,000 being awarded to the winner of the race making it the richest two-year-old event in Victorian racing.

This year marks the 52nd edition of the race which dates back to 1971, when won by Tolerance.

It has become a target race for many a big trainer and breeder with the young horses talented enough to win this race going on to have huge careers as breeding prospects or racing stars.

The race is run on a day that also features two other Group 1s – the Oakleigh Plate and the Futurity Stakes.

The likes of Manikato, Bounding Away, Zeditave, Redoute’s Choice, Alinghi, Star Witness, Sepoy and Catchy are just some of the champion horses to have won this prestigious event.

While Dwayne Dunn leads the way in the jockey ranks with four Blue Diamond victories to his name.

1994 Blue Diamond winner Hurricane Sky has run the fastest time ever in the race with the clock registering a time of 1:08.1 and in doing so gave trainer Gerald Ryan his first and only triumph in the race.

Artorius is the most recent winner of the race for father-son training duo Anthony & Sam Freedman.

Barriers are always of utmost importance to the winning chance of juvenile horses.

Barrier number five has produced the most success in Blue Diamond history with six winners coming from this gate.

It seems as though being drawn an inside barrier if the field tends to be large brings with it less success than most may think.

While barrier two and three bodes a worse proposition when fields exceed 14 runners with no winners coming from those draws.

Interestingly, wide barriers do not seem to be too much of a deterrent with four winners coming out of barrier 14.

Barrier nine provided the winner of the 2021 Blue Diamond.

Enthaar was the shortest priced favourite in this race since Sepoy started $1.40 back in 2011.

Six favourites have won the race since Sepoy’s 2011 victory but prior to that it was graveyard for favourite punters with only two favourites winning the race from 1997 to 2010.

In the little more than three decades the race has been run it has been a close battle between the colts and fillies.

The colts edge ahead with 17 victories in the race since 1989 while the fillies have been successful on 13 occasions.

Geldings are the least successful having only won three times in that time frame.

The Blue Diamond Preludes have provided the most number of winners for this race in the last 37 years with 22 juvenile sprinters coming through the Preludes.

Arcaded came away with the fillies edition of the Prelude in 2021 as a $2.5 favourite and ran well in 2021 Blue Diamond, while star colt Anamoe used the Prelude has his lead-up to his enormous effort in defeat the same year.

Interestingly, it was a lowly-ranked Sandown benchmark affair over 1300 metres that provided us with the winner of the 2021 Blue Diamond.

Artorius would come out, ‘pounce, bomb them and win,’ as Matt Hill called.

Winners of the Chairman’s Stakes have only been triumphant in the Blue Diamond three times in the form of Extreme Choice (2016), Road To Success (2000) and Redoute’s Choice (1999).

Entharr, the 2021 favourite for the race come out of the Chairman Stakes after an impressive win as a $2.2 elect with BetDeluxe trained by Ciaron Maher & Dave Eustace.

She would have been the first Blue Diamond success for the training operation after coming close with Away Game and Muntaseera in 2020.

Are there any other races on the day?
How do I bet on the Blue Diamond?

Punch in betdeluxe.com.au to your browser and find your home for all your different types of ways to bet not only on Blue Diamond Day but every race across Australia.

Where do the winners of the Blue Diamond race next?

Most winners or placegetters of the Blue Diamond usually head up to Sydney for the Golden Slipper.

How To Bet On The Blue Diamond