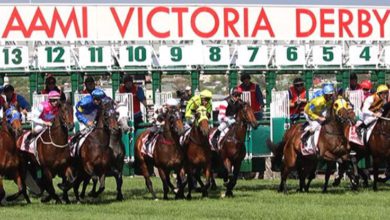 This is the top gong staying event for the three-year-old’s on the racing calendar.

The Victoria Derby provides runners with a stamina testing 2500-metre run around the Flemington circuit in a bid to take out a prize pool worth $2,000,000.

The current champion of the race is the Ciaron Maher & Dave Eustace-trained Hitotsu.

It is a race that dates all the way back to 1855 and is one of the oldest, most prestigious events in Australian racing.

With the starting position being half way up the main straight, entrants greet the judge twice as the thundering hooves of three-year-old stayers attempt to carve their path to Group 1 success.

On what is arguably the biggest day of racing in the Spring Carnival there are three more exceptional Group 1 races on the card with the running of the AUD$2 million Kennedy Cantala (1600m), the AUD$1.5 million Coolmore Stud Stakes (1200m) and the AUD$1 million Empire Rose Stakes (1600m).

Fiveandahalfstar (2012) trained by Anthony Cummings – who ran the quickest ever Derby time in 2:35.92 – and Prized Icon (2016) trained by James Cummings continued the Cummings family legacy in the race.

On the topic of leviathan racing families, the Lloyd Williams-owned Efficient is the most recent galloper to have won a Victoria Derby followed by Melbourne Cup.

Williams’ striking grey stayer outdid his Derby rivals in 2006 with a barnstorming finish as a heavily backed favourite and then went on to win the 2007 Melbourne Cup in front of Purple Moon.

Lee Freedman takes the mantle of the best Victorian Derby trainer since 1983, with three wins in that period. His winning stayers were Benicio in 2005, Portland Player in 1996 and the great Mahogany in 1993.

But despite all the names and champion horses being thrown about, the 2020 edition of the race might be one of the great racing stories we have come to see.

The former North Melbourne and Carlton coach applied the blinkers for the first time to his horse and notched up his first ever Group 1 win as a trainer with young jockey Lachlan King also registering his maiden Group 1 triumph.

The double digit barriers have proven to be a tough spot to win from but the last six years has proven not so bad.

Barrier one and barrier five have produced the most winners in the last 31 years with four wins from each, while barrier six has provided three winners in that period

The most recent winner Hitotsu come out of barrier six.

The well-fancied favourites in these races have fared okay in the last 31 years by providing the punters nine winners.

Current Derby champion Hitotsu crossed the line after being hammered in betting from $9 into $4 favourite.

The Mark Newnham-trained Shadow Hero – favourite in 2019 – became the seventh favourite to start $3 or shorter in that time.

Mick Price was the only trainer to guide a stayer to victory at a price of $3 or less with the highly talented Tarzino ($2.90) being the only horse to salute.

The most recent favourite to win a Victoria Derby was the David Payne-trained Ace High who strode first past the post as a $7 elect in 2017.

For those punters who steer clear of favourites and like a roughy, Rebel Raider at $101 in 2008, Fiveandahalfstar at $41 in 2012 and Johnny Get Angry at $21 in 2020 have been the blowout results in recent times and suggest you can get a run for your money at big odds.

Fillies have found this race extremely tough to win but it must be noted that they make up a miniscule sample size of runners since 1983.

Only one filly has been able to defeat the colts and geldings that generally line up in this field and that was the Peter Snowden trained Forensics who won in 2008.

There are predominately two main lead-ups that come to fruition in the Victoria Derby.

The first of those is the Moonee Valley Vase (2040m) on Cox Plate Day and the second of those is Norman Robinson Stakes/Caulfield Classic (2000m) at Caulfield.

The Moonee Valley lead-up has had the greatest impact on the Victorian Derby with 15 winners in the last 31 years having had their prior start in the Moonee Valley vase.

Since 2011, only three winners have come from the Vase with Tarzino, Prized Icon and Johnny Get Angry being those horses.

The Norman Robinson/Caulfield Classic has produced four Derby winners since 2011 meaning 11 have now come directly from that race.

Hitotsu (2021) won the race coming directly from the Caulfield Guineas and became the first to achieve that feat since Monte Carlo in 1956.

When is the Victoria Derby held?

How To Bet On The Victoria Derby