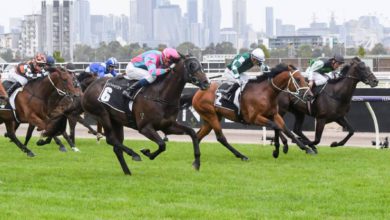 The Australian Guineas is one of the most prestigious Group 1 mile races at Flemington on the yearly racing calendar.

Held during the Autumn Carnival, the race boasts prize money totalling $1 million (AUD) which includes $600,000 to the winner.

The race is restricted to three-year-olds with the colts and geldings typically receiving 56.5kgs while any fillies competing in the event are ordained with 54.5kgs to carry.

Inaugurated in 1986, the first winner of the race was the Angus Armanasco-trained True Version.

The traditional pathways for this race are usually the Manfred Stakes (1200m) and Autumn Stakes (1400m) both run at Caulfield and Colin Hayes Stakes (1400m) at Flemington the fortnight prior.

The course layout for this race is not ideal for horses drawn too wide as there is very little time from when the gates first open to hitting the first part of cornering for the race.

And with a 450 metre straight to negotiate, most runners will usually get enough time to navigate their way through and find their runs.

With the field usually at full capacity, the Australian Guineas always makes for an enthralling race and this year will be no exception.

Many champion horses have graced the turf at Flemington for this race and have gone on to have spectacular racing careers.

The most jaw-dropping win in this race was this year’s edition with Lunar Fox winning at the incredible odds of $301 defeating runner-up Cherry Tortoni and the favourite Tagaloa.

Other famous victories include the New Zealand colt Zabeel who took out the 1990 edition of the Australian Guineas and has gone on to be a breeding sensation.

The Lee Freedman-trained and Lloyd Williams-owned Mahogany (1994) who would then go on to win the AJC Derby and Lightning Stakes.

Freedman and the late Colin Hayes are the most successful trainers in the race having won it three times each.

Of the current jockeys who are still riding professionally, Damien Oliver and Craig Newitt reap the most success in the race having won on two occasions.

With most winners of the race hailing from either Victoria or New South Wales, the last two years has thrown up winners stabled out of Queensland and Tasmania.

The 2020 winner Alligator Blood was based in the Sunshine Coast under the tutelage of David Vandyke at the time of his win, and 2019 winner Mystic Journey would make the trip across Bass Strait on the Spirit of Tasmania from her stables in Devonport.

Barrier seven has proven to be the most successful position since 1989 and has provided six winners.

Only two favourites have triumphed in this race since 2010 with those being Hey Doc at $3.40 in 2017 and more recently Alligator Blood last year at $2.70.

However, throughout the Australia Guineas running from 1986 to 2009, 11 favourites scored victory in that time.

The only horse at double figure odds to win during that 24-year period was the Rick Hore-Lacy-trained Kenny’s Best Pal at $11 back in 1993.

The colts and geldings dominate the entries for this race every race and as a result we’ve seen 26 colts or geldings cross the finish post first since 1989.

However, in recent times, fillies have had a reasonable amount of success in this race.

Triscay was the first to buck the trend, being the first filly to win the race back in 1991.

29 of the last 35 winners of this race have either won their previous starts or finished runner-up.

When is the Australian Guineas held?

The race will be run and won on the 27th of February at Flemington.

The winner of the race may head towards the All Star Mile in March at Moonee Valley or potentially the Randwick Guineas in Sydney.

How To Bet On The Australian Guineas