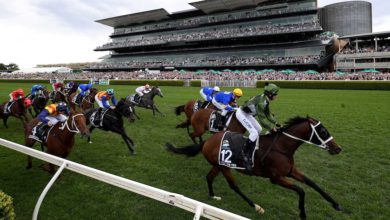 The world’s richest race on turf.

The Everest sprint run over 1200 metres hands the biggest first place purse in global racing to its winner.

The race has a peculiar entry system whereby 12 slots are allotted for the sale price of $600,000 purchasers who wish to fork out the entry fee in order to race, lease, contract or on-sell their slot.

NSW Racing boss Peter V’Landys is said to be the brainchild of the idea in an attempt to trump the Melbourne Racing Carnival with this new addition to the Sydney Spring Carnival.

The event has garnered the attention of racing fans world wide with its inaugural running in 2017 being won by Peter & Paul Snowden-trained sprinter Redzel.

Redzel went back-to-back with wins in the 2017 and 2018 editions of The Everest being trained by Peter & Paul Snowden and ridden by champion jockey Kerrin McEvoy on both occasions.

His 2017 win saw him defeat Vega Magic and Brave Smash, while 2018 saw him hold off Golden Slipper winner Trapeze Artist and Osbourne Bulls.

In doing so, he catapulted himself to second place – behind Winx – for the highest prize money earned on Australian turf.

It was a genius move by Waller and his stable who freshened him up and applied the blinkers for the first time after a runner-up finish behind Bivouac in the Golden Rose Stakes (1400m).

The three-year-old colt struck gold with Glen Boss guiding him to victory and as a result it meant his prize money topped $7million (AUD) which led him to being retired from racing to take up a stud career.

Kerrin McEvoy has climbed to the summit of The Everest on three out of four occasions after riding Redzel to a double and Classique Legend.

Of the four times The Everest has been won, a different barrier has graced us with the winner every time.

From the eight place getters in the history of the race only two of them have drawn a double figure barrier.

Vega Magic (2017) and Bivouac (2020) both drew barrier ten in their respective runner-up finishes.

It has been a very mixed bag of results for favourites in The Everest.

The 2020 Everest champion Classique Legend became the first ever favourite to win the race after he darted away with a two-and-a-half length victory at an SP of $4.2.

The David and Ben Hayes and Tom Dabernig-trained Vega Magic finished second behind Redzel in 2017 as a $4.8 favourite.

SEX/TYPE
The boys have absolutely dominated this race.

In fact, not one mare or filly has won or filled a place in this race.

All four editions of The Everest have been taken out by a gelding or a colt.

Redzel and Classique Legend are the geldings to have won the race, while Yes Yes Yes is the sole colt to have won.

Yes Yes Yes is also the only three-year-old to have been considered a genuine threat in the 2019 edition race and he proved his worth.
LEAD UP FORM & FIELD

Gaining a slot in the Everest is only reserved for a gun sprinters.

When is The Everest held?
Are there any other races on the day?
How do I bet on the Everest?
Where do the winners of The Everest race next?

How To Bet On The Everest