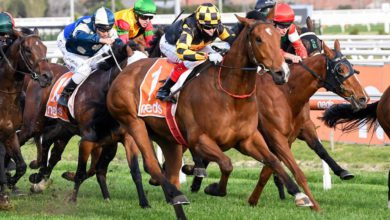 One of the hottest 1400-metre Group 1 handicap races in the nation takes place when the Sir Rupert Clarke Stakes at Caulfield is run and won.

Inaugurated in 1951, the Sir Rupert Clarke Stakes was originally known as the Invitational Stakes and has had various name changes throughout its illustrious tenure as a mainstay on the Victorian racing calendar.

The race has been a catalyst for star horses in the spring carnival and used as a catapult towards miles races and beyond.

The Sir Rupert Clarke Stakes is opened for three-year-old horses and older at weight-for-age level and attracts some the fastest and most brilliant horses in Australia.

Current reining champion Behemoth will line up in the race this year alongside South Australian compatriot Beau Rossa with both set to peak into the race and duel it out at the finish.

Some absolutely stars of the turf made a name for themselves by winning the Sir Rupert Clarke Stakes.

It is a race that required the fittest and strongest of horses to get that economical run who usually end up winning.

The early sharp turn combined with the short run into the final bend makes the Sir Rupert Clark one of the most testing 1400-metre races in the spring carnival.

Testa Rossa is arguably the the most famous horse to have won this race as he achieved the double through 1999 and 2000.

He is one of only three horses since the inception of the Sir Rupert Clarke Stakes to have won the race twice.

Champion thoroughbred Manikato scored victory in 1979 to prove to punters his ability to sprint and get beyond that 1200-metre range he was so famously domintant in.

The race has born fruit to star sires with Testa Rossa and Exceed and Excel going on to have great success outside the races in the breeding barn.

Behemoth (2020) is the current champion of the race after producing a barnstorming finish to run over the top of his rivals despite having to carry 60kgs.

The barrier draw for the Sir Rupert Clarke is one of intrigue when we go through the list of winners what barrier they draw.

The most successful barrier since 1983 has been number five with seven winners coming from this gate.

Interestingly, wide barriers do not seem to be much of a concern.

Barrier 15 has provided the second most amount of wins in this time with five winners.

The favourite for the 2021 edition, I’m Thunderstuck, was an unlucky third being beaten by Sierra Sue and Dice Roll.

The last favourite to have won of this race was Behemoth (2020) and he succeeded Begood Toya Mother (2019) who was also a winning favourite.

Since 2000, including the two most recent favourite winners of Behemoth and Begood Toya Mother, favourites have won the race on seven occasions.

The Sir Rupert Clarke Stakes has been a happy hunting ground for the boys with 17 winners in the last 31 years being either a horse or colt.

Conversely, the girls have not made much of an impact in this race with only four winners in the last three decades and the the most recent of those being Response in 2010.

It is a race that has been won by four-year-old’s with 12 winners in the last 22 events.

The Sir Rupert Clark Stakes usually throws up plenty of different form lines for this race, but predominately it is the Weight-for-Age Group 1 Memsie Stakes (1400 metres) as well as the Group 2 Bobbie Lewis Quality (1200 metres) that usually gives us the main guide from a form perspective.

From 2002 till now running outside the top four at your prior start has not been the recipe for success with 17 of the last 19 winners running in the top four at their lead-up run into the Sir Rupert Clarke Stakes.

When is the Sir Rupert Clarke Stakes held?

The race will be run and won on the 18th of September, 2021 at Caulfield racecourse.

The winner and runners in the Sir Rupert Clarke Stakes generally head towards the big mile in the spring.

Some of those mile races will include the Toorak Handicap at Caulfield as well as the Caulfield Guineas should a three-year-old opt to use the Sir Rupert Clarke as a springboard.

The Cantala Stakes at Flemington is also an option.

How To Bet On The Sir Rupert Clarke Stakes