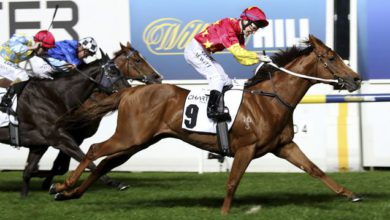 The A J Moir Stakes is a Group 1 Weight-for-Age feature event at Moonee Valley racecourse for any speed demon who fancies themselves over the short course of 1000 metres.

The A J Moir has had a two distance changes since its inception.

The A J Moir gained Group 1 status in 2013 with Samaready being the first horse to win under those conditions.

This 1000-metre Group dash for cash is run on a Friday night under lights of the amphitheatre that is colloquially known as ‘The Valley.’

Simply put, you need to have blistering sustained speed in order to be a winning hope in a race like this with only the sharpest horses with a serious turn of foot possessing a genuine winning hope.

The race cuts through the inner part of the track as the starting chute fires the horses through a 200-metre section which then launches the field on the course proper.

With a $1,000,000 purse on offer, the A J Moir Stakes attracts some of the best homegrown sprinters around the nation and allows those who want to target a Group 1 before the Flemington carnival kicks off a chance to do so.

It is usually used as a lead-up to some of the bigger sprinting races such as the Manikato Stakes (1200m) run at the track in October as well as the VRC Sprint (1200m) run at Flemington in November.

Jockeys will also try to win this race in order to lock in potential rides coming into the pointy end of the spring carnival.

Damien Oliver has been the most successful hoop in the race with four wins, while Angus Armanasco and Bruce McLachlan share four wins each as trainers.

The A J Moir Stakes honour roll over the last 15 years is a sight to behold.

We will start with the undefeated mare and our greatest ever sprinter in Black Caviar (2014, 2015).

Her back-to-back victory in the race was part of her incredible achievement as a race horse and she joined – at the time – The Judge as the only horses to have won the race multiple times.

The record, however, for most wins in the race belongs to Buffering who was arguably the bravest ever sprinter on Australian soil.

His 2012, 2014 and 2015 victories encapsulated punters world wide and his winning record in the race remains unsurpassed to this day.

Champion sprinter Miss Andretti also produced a sprinting masterclass in 2007 by scoring a victory in the race with Craig Newitt in the saddle.

Speed demon Nature Strip also used this race a catapult for his career when winning in 2019 with an incredible front-running performance.

Barriers are arguably one of the most important factors at this tight-turning quirky Moonee Valley track.

The inside three barriers have won this race 16 times in the last 38 years.

Barrier three has provided the most winners since 1983 with seven horses jumping and winning for that barrier in the Moir Stakes.

In recent times, the race has been a bit of a graveyard for favourite punters.

Only one favourite has won the event in the last nine years so that must be taken into consideration.

The 2021 favourite for the race in the form of Profiteer started $3.6 and failed to run a place with Wild Ruler winning the event as an $11 elect.

Horses who can handle the tight circumference of the Moonee Valley are usually favoured.

Looking for track specialists and horse who re fresh or first-up into this race is generally the way to go.

Three-year-olds cannot be ignored in the A J Moir with Extreme Choice (2016) and She Will Reign  (2017) scorching home with impressive sprints to win.

The majority of runners will comes into race first-up and fresh with an eye on the bigger sprint races  in the spring carnival.

Pippe used this race as a grand-final last year and can be used as a target race for horses who wish to attack the early Group 1 races of the spring prior to all the big guns coming back.

The Mittys McEwen Stakes (1000 metres) can be used as a lead-up event to the race.

It also pays dividends to watch the trials and jump outs of each horse prior to the first-up run.

The gallops at the course earlier in the week leading up the A J Mori can provide a hadny guide as to who can handle the track and who is screwed down to sprint up to their best.

When is the Moir Stakes held?

If good enough, some horses will end up getting a slot in The Everest as we saw with Nature Strip in 2019.

Some horses will venture towards the Group 1 Manikato Stakes (1200 metres) at Moonee Valley in a month, while others will this race as a springboard to the VRC Sprint (1200 metres) at Flemington in November.

How To Bet On The Moir Stakes