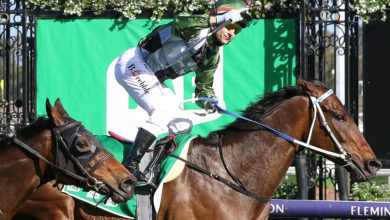 There are not too many 2000-metre Group 1 events around the world or Australia that compare to the Cox Plate, but the Turnbull Stakes is one of, if not, the closest you will get to a Cox Plate without it being a Cox Plate.

The Turnbull Stakes is a Group 1 race made famous by the brilliant gallopers who have competed in and won this event since the year of its inception in 1865.

The circuit itself begins at one of the chutes towards the back straight of Flemington racecourse and the horses go by the well-known Chiquita Lodge stables.

It entails a straight line run towards the first corner of the race of about 400 metres and then the long-sweeping run into the home straight begins.

This race entails a mixture of stamina and acceleration that only the best of horses are equipped with.

Many of the horses who compete in the race use this as a stepping stone onto the Cox Plate, Caulfield Cup and Melbourne Cup.

That race is now part of a Cox Plate bonus scheme which rewards a horse to win the Turnbull Stakes/Cox Plate double in the same year a whopping $1,000,000 worth of extra prizemoney.

It is a massive feature event on the Flemington program and is one of the most looked at form references for punters come spring carnival time.

Like many of the 2000-metre weight for age events we have in our country, Winx is the gorgeous girl who tops the charts with her wins in 2017 and 2018 showcasing to the world why we consider her our greatest ever.

Many would argue the 2017 eight-length pummelling she gave her rivals was the most brilliant of two victories, but it is safe say the barnstorming finish of her 2018 win, where she ran down stablemate Youngstar, was the better of the two.

Trainer Chris Waller has made this race a staple of his racing success in the last decade having won five of the last six times this race has been run and won.

Waller has won this race fours year in a row with Kings Will Dream (2019) returning from injury to win and star mare Verry Elleegant the reigning champion of the race.

Godolphin warrior Hartnell bolted in the 2016 edition in what is said to be one of the most brutally run Turnbull Stakes in recent times.

It is not a race that has caused a massive blowout with All Our Mob in 1995 being the biggest in the history of the race at $34.

Since 1983, barrier seven has provided this race with the most number of winners with an incredible 12 runners jumping from the middle gate.

The Turnbull Stakes has been a fairly happy hunting ground for the favourite in the race since 2011.

The most recent beaten favourite in the race was Mr Quickie after he ran 10th in 2019 and becoming the worst performed favourite since December Draw’s win in 2011.

Even though Verry Elleegant was a beaten favourite in 2021, Incentivise was still very well liked by the market and started a $2.8 elect.

Verry Elleegant (2020) made it 14 wins for mares in this race since its inception and joined illustrious company with her former stablemate Winx as well as Makybe Diva (2005) and Sunline (2001) to have been recent mares to win the race as a favourite.

Ten of the 13 winners since 2008 were at least six years of age, including seven in that age bracket.

Winx was a seven-year-old mare in the second of her wins and the oldest of the winners since 2008 was warhorse Zipping who won the race as a nine-year-old veteran in 2010.

The George Main Stakes (1600m) is one of the main lead-up races out of Sydney and it has been since the victory of Lucia Valentina back in 2014.

Winx used that race as her foundation for back-to-back Turnbull Stakes victories.

The Hill Stakes (1800m) at Randwick has also been used as a platform and it is also likely that the Makybe Diva Stakes (1600 metres) will be a race that a handful of horses come from.

When is the 2021 Turnbull Stakes?
Are there any other races on the day?

Yes. Turnbull Stakes Day is supported by a host of Group and Listed races on the day.

The winner or runners in the race may head towards a Cox Plate path if their trainers think they are good enough.

Most of the field use this race as a stepping stone towards the Caulfield Cup and Melbourne Cup.

How To Bet On The Turnbull Stakes