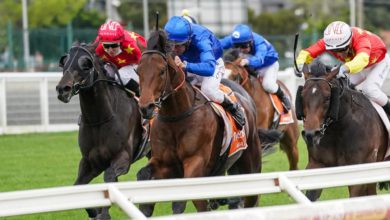 The Caulfield Guineas is the premiere mile event for the three-year-olds during the Australian Spring Carnival.

Raced at ‘The Heath’ around the beautiful surrounds of Caulfield in Victoria’s metropolitan east, the race is one of the most prestigious stallion making events on the racing calendar.

The race was inaugurally run in 1881.

In what is a set weights race, the majority of horses carry a 56.5 kilos impost on their back.

It is almost impossible to begin narrowing down the horses you automatically think of when ‘Caulfield Guineas’ gets mentioned in conversation.

The son of Octagonal has gone on to become one of the most successful stallions at stud in Australian breeding history with just over 50% of his offspring making the track and winning at least one race.

But the biggest run of all time goes to the Bart Cummings trained God’s Own (2005).

He was aptly named when you look back at how he won, given it probably took some sort of divine intervention for him to reel in runaway leader Paratroopers.

After being belted and chopped out for a clear run on several occasions heading into the home straight, champion jockey Glen Boss somehow launched the Dato Tan Chin Nam-owned horse to victory.

Mighty Boss (2017) produced one of the biggest upsets in not only this race but in recent racing history on Australian soil after winning the event at $101.

Abaridy’s win at $251 in 1986 is the longest-priced Group 1 win in Australian racing history.

Of the last 29 winners in the Caulfield Guineas, 24 of those have come from barriers one through to eight.

Anamoe took out the 2021 edition from barrier thirteen.

Six runners who have drawn wider than barrier eight have been triumphant in the event.

The most successful barrier in the last 29 runnings has been barrier one with seven winners.

The favourites have a fairly solid record in this race with 13 of them having won the race in the last 32 years.

Anamoe (2021) was the most recent victorious favourite after starting a $2.10 elect when defeating Captivant by half-a-length.

Given the majority of runners in this race are three-year-old colts and geldings, they clearly have a stranglehold on the event.

You have to track all the way back to Surround’s win 1976 to find the last time a filly won this race.

Ole Kirk (2020) used The Golden Rose as his lead-up to glory, while Super Seth (2019) came from the traditional Caulfield Guineas Prelude to set the platform for his victory.

From 2012 to 2020, the Sydney based trainers have saddled up the most successful crop winning seven out of nine.

The Stutt Stakes (1600m) at Moonee Valley produced shock winner Mighty Boss in 2017 but that race is usually regarded as one of the weaker form references heading into the event.

The race also bears fruit in the Victoria Derby (2500m) with 16 winners progressing on to win the premiere staying event for three-year-old’s during Spring.

The two-year-old stars of the 2020/21 racing season who look likely to progress into the Guineas field are Anamoe, Artorious, Converge and Stay Inside.

When is the 2021 Caulfield Guineas held?
Are there any other races on the day?

Yes. The Caulfield Guineas meeting coincides with another three Group 1 races on the day;

How do I bet on the Caulfield Guineas?
Where do the winners of the Australian Guineas race next?

The winner or runners in the race may head towards a Cox Plate path if their trainers think they are good enough.

Some towards the All Star Mile in March the following year or potentially the Randwick Guineas in Sydney.

How To Bet On The Caulfield Guineas