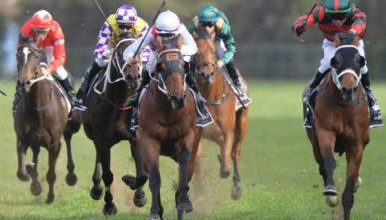 The Golden Rose Stakes at Rosehill is one of the most hotly contested set weights three-year-old races in the country with colts, geldings and fillies vying for this illustrious prize during the Sydney Spring Carnival.

It was first won by Kapalran in 1978 after the race was Initially dubbed The Peter Pan Stakes – named after champion racehorse Peter Pan.

Racing NSW had originally set this race up as a 1500-metre affair at Group 2 level.

2003 saw the name change to “The Golden Rose Stakes” be officially implemented and it rapidly grew in stature to become one of the main events during the Sydney Spring Carnival.

The race was tagged by Racing NSW as ‘Listed’ in 2005, before it gradually rose to prominence by becoming a Group 3 race in 2006 and progressing to Group 1 status in 2009.

It is a race that has direct ties to the Golden Slipper hosted earlier in the year with the two-year-olds competing that race naturally progressing onto this event.

Peter V’Landys continued his prize money spending spree by announcing this race as part of his ‘Golden Slam’ initiative to keep star horses on the track.

A $5,000,000 prize money bonus is given to any horse who can achieve wins in the Golden Slipper as a two-year-old, The Golden Rose as a three-year-old and The Golden Eagle as a four-year-old.

You only have to look at the last few years of this race to find a host of brilliant winners.

It is almost a fait accompli that if the winner of this race is a colt, he goes on to have a stallion career.

Zoustar, the winner of the 2013 Golden Rose, progressed to win the Coolmore Stud Stakes up the straight and would go on to become one of the most successful studs since his retirement.

SInce 2008, the Darley/Godolphin operation have won the race an incredible six times.

One of the biggest upsets in the race was the 2017 edition when eventual winner Trapeze Artist was sent out a $41 chance. Ironically, he defeated his stablemate Menari who was the well-backed favourite in the race.

Wide barriers do not seem to be the ‘awkward draw’ that many believe.

Four winners from 2013-18  jumped from a double-digit barrier in the race.

However, barrier one is the most successful gate to be drawn in with five winners having drawn the rail.

No winner since 1983 has come barrier 10 but barrier 11 has yielded four winners from that period to now.

Last year’s winner Ole Kirk won the race from barrier three to take the tally of winners from that barrier since 1983 to four.

In the 37 times this race has been run since 1983, only 12 favourites have greeted the finish post in first place.

Bivouac (2019) was the most recent favourite to salute and did so as a $2.5 elect when he defeated eventual Everest winner Yes Yes Yes in a dogfight up the Rosehill straight.

SInce the turn of the century only six favourites have been triumphant but all runners bar two have started in single figures.

Fillies have found this race extremely tough to win but it must be noted that they make up a miniscule sample size of runners since 1983.

Only one filly has been able to defeat the colts and geldings that generally line up in this field and that was the Peter Snowden trained Forensics who won in 2008.

When looking at the form guide leading into The Golden Rose Stakes, the best course of action is to find horses that have actually won their lead-up event.

However, 2020 and 2021 proved to be a case which thwarted that idea as $1.55 favourite Rothfire went under after bolting in to win the Group 3 Run to The Rose and Anamoe being defeated by In The Congo after winning the Run to the Rose.

The lead up form of the Run To The Rose has generally proven to be the superior form reference in the last 10 years with the 1200-metre sprint at Rosehill a fortnight prior providing more Golden Rose victors than any other race.

The Dulcify Stakes (1500m) may also be an option for a lead-in run held in early September at Rosehill given it replaced the Group 2 Stan Fox Stakes (1500m) which has been moved to a different date.

When is the Golden Rose held?

How To Bet On The Golden Rose Stakes