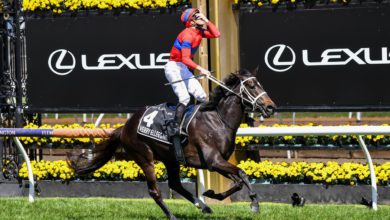 ‘The race that stops the nation.’

The Melbourne Cup is the most famous race on the Australian racing calendar and falls annually on the first Tuesday of November.

A genuine staying contest that is run over 3200 metres, the race offers a chance for horses with staying pedigree and stamina to show their best on the grandest of all stages at the Flemington racecourse.

With the starting post being in the straight racing section of the track, the entrants thunder down the straight and cross the finish post twice as the roars of thousands at the course and millions across the country reverberate.

This year will mark the 161st running of the event which dates back to 1861, when won by Archer.

The race has produced some of the most well-known horses in racing history not only in Australia but across the globe.

The horse most people automatically refer to when the Melbourne Cup is mentioned is the great mare Maykbe Diva.

She won the race a record three times in a row – a feat yet to be achieved by any horse in racing history.

Jockeys Bobby Lewis and Harry White have tied for the most Melbourne Cup winning rides with four apiece.

Leviathan owner Lloyd Williams has won the cup a record seven times with his most recent winner being a 2020 triumph with Twilight Payment.

Barriers are probably of less importance in a race over such a long distance but it is still a factor that needs to be placed under consideration.

Barrier five has produced eight winners dating back to 1921.

Since the year 2000, there have been five barriers which have accounted for 10 wins;

No winner of the event had come from barrier 18 in the history of the race prior to Verry Elleegant winning in 2021.

The most recent favourite to win the race was the Gai Waterhouse-trained Fiorente who started the $6 elect in 2013 and held on to win from Red Cadeux.

Incentivise was the shortest priced favourite we have seen in many years, but was beaten by Verry Elleegant.

Four-year-old and five-year-old horses have dominated the Melbourne Cup.

Incredibly, only three eight-year-old horses have won the race with Twilight Payment (2020) becoming the third ever in Cup history to win the race.

The male horses have a stranglehold with only 17 wins being accounted for by female horses – the most recent of those being Verry Elleegant in 2021.

She became the first mare to win the race since Makybe Diva’s three-peat which ended back in 2005.

The traditional lead-up race for most Melbourne Cup entrants is the Caulfield Cup at Caulfield just over a fortnight prior.

The Caulfield Cup is one of five ballot exempt races whereby the winner is guaranteed an automatic start in the Melbourne Cup.

The other four include The Andrew Ramsden Stakes, The Bart Cummings, The Cox Plate and The Lexus Stakes.

When is the Melbourne Cup held?

The Melbourne Cup is held on the first Tuesday of November.

Most winners or placegetters of the Melbourne Cup will usually head to the spelling paddock for a well earned rest or some will head to Sandown for Zipping Classic (2400 metres) or Sandown Cup (3200m).

How To Bet On The Melbourne Cup