The best bets, tips and comprehensive preview of the 11-race Group 1 card from Bendigo.

Plenty of value to be found on what is a big Saturday night of harness racing.

Blue Chip Delight is clearly the class runner in the field and faces an easier field than the one he competed against when resuming for new trainer Russell Jack.

His first-up effort saw him lead at a solid tempo and then fade out to run third , but that effort should see him strip much fitter for the run.

The only real query on him here is the fact he draws the marker pegs and is on the second row, so he will have to navigate his way into the clear.

Happy to take the risk at the price and if he does get luck throughout the trip he will be returning to his winning ways.

Nephew of Sonoko is drawn on the second row but his effort last week was just too good to ignore.

He usually runs his races as an on-pace runner.

He did not get that in his favour in the Group 3 event last start after he was eased out of the speed battle early, forced to take his medicine and settle a bit further back than expected.

Despite those negative tactics, he rifled home to run some cracking late sectionals and he will now have to adopt similar tactics.

This race is far easier than the race he was in last week and his late burst in the race is what will win him this event.

What a race this is going to be.

The Group 1 Australasian Championship and it looks a match race in two between Cover of Darkness and Majestuoso.

The standing start means Majestuoso will begin from a 10-metre handicap, so the opportunity for Cover of Darkness to pinch an early winning break is why we will side with the Emma Stewart-trained pacer.

He won with a fair bit in hand last start after scooting away as a $1.70 favourite at this track over 2170 metres to win by six metres.

He is undefeated at Bendigo and now rises to the 2560-metre trip for the first time, but the way he hit the line in his last start win suggests he will thrive under these conditions.

If there was ever going to be a high-pressure mile we could use as the definition in the Oxford dictionary then this would be it.

A front row full of genuine speedesters who are likely to attack each other as soon as the arms fold back.

Think this race sets up well for Western Sonador who was brilliant winning his last start at Geelong over 2100 metres.

He has race fitness on his side which is going to be a critical factor in this race and it is something the even-money favourite lacks.

Dropping back to a fast-run mile is an ideal situation for him with his stamina to be used to full effect. 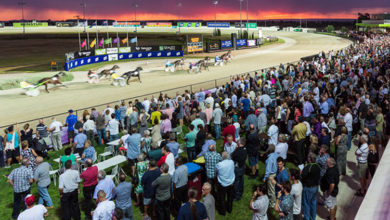