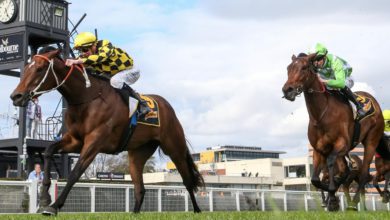 The Thousand Guineas is a Group 1 mile race reserved solely for the three-year-old fillies who are up to the task of testing themselves in a tough affair at Caulfield.

It is a race that has thrown a mixture of results in recent times with double-figure odds winners popping up as well as some seriously short favourites getting the job done.

The first edition of the Thousand Guineas was run in 1945 and won by Sweet Chime.

The race is a test not only of stamina, but of a filly’s ability to handle the rise up the hill up the back straight of Caulfield as well as the two sharp turns leading into the home straight.

There has been neither an advantage to come from the Sydney or Victorian mile races with a handful of fillies winning the race from both states.

Atlantic Jewel is arguably the most famous horse to have won the Thousand Guineas in the last 10 years.

The star galloper trained by Mark Kavanagh and ridden by Michael Rodd was installed as a $1.70 favourite and did not disappoint the punters.

She would go on to win the race by just over three lengths in a dazzling display.

Miss Finland (2006) is also a filly to have won the Thousand Guineas since the turn of the century and competes alongside Atlantic Jewel as one of the most popular winners of the race.

She was David Hayes first every victory in the race and then he followed that up with Irish Lights (2009).

Stay With Me (2015) then emulated her mother Miss Finland by winning the Thousand Guineas and making three wins in the race for Hayes.

Aloisia (2017) caused one of the more recent upsets in the race when when knocking highly touted filly Alizee as a $14 outsider.

But the biggest upset has been saved for 2021 with Yearning crossing the post in first as a $26 winner.

Barrier five is the peach barrier to draw with five winners coming from this gate since 1983.

Only barriers 2, 4 and 9 have come close to that many with four winners each jumping from those gates.

18 winners since 1983 have drawn barriers one through to five.

The outright favourites in the Thousand Guineas have won seven times since 2006.

It is a fairly good record with the last faovurite to win the race being Flit (2019) as a $2.4 elect when she held on in a three-way photo finish.

Hinged was the beaten favourite in 2021 after starting a $3.8 elect.

There have also been some very notable boilovers in recent years with five runners saluting in double figure odds.

It is a race restricted to three-year-old fillies.

Most winners have already had at least two to three runs under their belt.

Odeum (2020) used the Listed Jim Moloney to make her presence felt in the Thousand Guineas.

This year’s favourite Hinged used the Flight Stakes as her lead-up run to event in a similar mould to what her stablemate Hungry Heart did in 2020.

The Flight Stakes (1600m), Caulfield Guineas Prelude (1400m) and Edward Manifold (1600m) are all viable options for the fillies heading into the Thousand Guineas.

When is the Thousand Guineas held?

The race will be run and won on Wednesday the 13th of October, 2021 at Caulfield Racecourse.

Other fillies chance their arm carrying 49kgs in the weight-for-age Empire Rose Stakes (1600m) at Flemington.

How To Bet On The Thousand Guineas