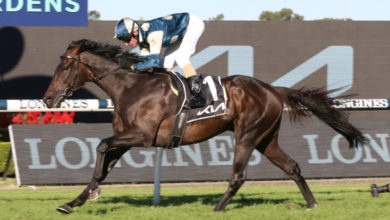 The Tancred Stakes is one of a kind.

It is the only Group 1 Weight-for-Age race run over 2400 metres on the Australian racing calendar.

It attracts star prospects and champions almost every year and is one of the most prestigious events during the Sydney autumn carnival.

Former Sydney Turf Club chairman Hugh Tancred is who the Tancred Stakes is named after.

Unfortunately, for punters and connections, Sir Dragonet has since passed away and a new champion will be crowned in 2022.

The honour role in the Tancred Stakes is one that puts a sparkle in the eye.

Melbourne Cup champion and 10-time Group 1 winner Verry Elleegant triumphed in the Tancred Stakes back in 2020 to make it a second success in the race for trainer Chris Waller.

Godolphin, like Waller, has pinched the race twice with the old marvel Avilius (2019) and Hartnell (2015) getting the job done.

But, more recently, 11 of the last 22 winners have drawn out wider in the second half of the field.

It has almost been a 50% strike rate for favourites in the Tancred Stakes since the turn of the century.

Nine favourites since 2000 have been victorious in the race and the most recent of those was Sir Dragonet (2021) who lobbed as a $5.5 favourite.

The Tancred Stakes has been dominated by the colts and geldings since 2009.

In particular, the geldings have won the race eight times in that time frame.

Mares have also proven themselves in this race with three winning; Verry Elleegant (2020), Jameka (2017) and Silent Achiever (2014) all winning the Tancred Stakes

The main formline for the Tancred Stakes is usually horses who race in the Group 1 2000-metre Ranvet Stakes.

When is the Tancred Stakes held?

The winner and runners of the Tancred Stakes may head towards the Sydney Cup (3200m) later in the Sydney autumn carnival or some may opt to spell with race being their grand final.

How To Bet On The Tancred Stakes?