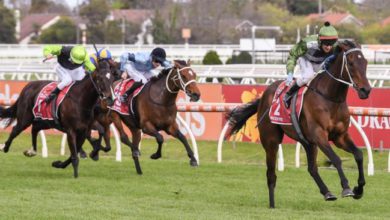 The Caulfield Cup is the premiere staying event over 2400 metres in the spring carnival.

Inaugurated in 1879, the race was originally run by Newminster.

It is always tricky trying to find the winner of a handicap staying race, in particular the Caulfield Cup.

It is made even trickier when it is hard to know whether this race is the grand final or whether the horse you like is using it as a platform to win the Melbourne Cup.

Usually a horse who settles anywhere from on-pace to midfield is preferable, but the superior wide lanes of the Caulfield straight can come into play if gallopers slingshot out deep on the track.

While the track might seem a leisurely stroll, the acid test really comes on in the back straight with an elevated back section that can suck the air out of a horse who does not have big aerobic capacity.

The Caulfield Cup is a race heaped in prestige with many brilliant horses having won the event and giving this race the title of the one of the premier handicap staying races in the country and in the world.

The most famous of winners in recent times would have to been Might and Power (1997).

His eight-length demolition job will still go down as the most crushing win the race has ever seen.

He and Ethereal (2001) are the most recent horses to have done the Caulfield-Melbourne Cup double.

Of course, it would remiss to exclude mentioning the great Bart Cummings.

The champion trainer holds the record for most Caulfield Cup winners with seven to his name.

The last of those was his might stayer and Melbourne Cup winner Viewed (2009) who was given one the best Caulfield Cup rides ever by Brad Rawiller.

Damien Oliver is the most successful jockey in the race out of the current crop of jockeys in Australia with four winners, but the champion hoop is yet to win the event since 1999 when he was triumphant on Sky Heights.

Barrier nine has produced the most amount of winners since 1983 with five coming from this gate.

Barriers three and seven are the next best with four winners in that time period.

Drawing wide out on the track is not necessarily a disadvantage either.

In the Caulfield Cup, six out of the nine favourites between 1999 and 2007 won the race.

In the last 13 years the race has been dominated by the males.

10 male horses have been victorious in this time frame with the only three girls to have won the race being Verry Elleegant (2020), Jameka (2016) and Southern Speed (2009).

There are a host of ballot exempt races which guarantee entry into the race.

The two most recents winners of the race have used the Turnbull Stakes to platform themselves for an attack at Caulfield.

When is the Caulfield Cup held?

The majority of winners and runners will trek towards the Melbourne or may even well head to the spelling paddock.

How To Bet On The Caulfield Cup