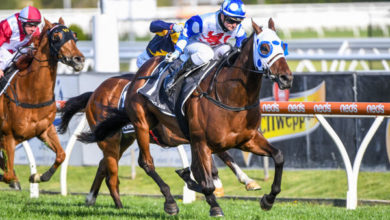 The time-honoured Toorak Handicap is one of the most prestigious Group 1 handicap miles across the Australian racing calendar.

In a race that is run at Caulfield Racecourse with a prize pool of $500,000 shared with those who land in the prize money placings.

The inaugural running of the race was in 1881 and won by Josephine.

It an event not always won by the best horse in the race with a lot of top horses entered in the Toorak Handicap being heavily penalised at the weights due to its handicap nature.

The winner of the race becomes ballot exempt for the Caulfield Cup with the last horse to have done the Toorak Handicap/Caulfield Cup double being New Zealand-bred galloper Leilani.

The most recent winner of the race was the Mick Price & Michael Kent Junior-trained I’m Thunderstruck.

A race of such prestige has been won by horses who have staked their claim as the best milers to grace the Australian racing turf.

Trainer Darren Weir dominated the race before being suspended with four winners in the space of five years.

Champion miler Fierce Impact (2019) also ticked this race off his impressive CV and was then succeeded by Mr Quickie (2020).

Gai Waterhouse also had her mare More Joyous (2010) tally up a victory in the race under the guidance of Nash Rawiller.

Scrolling back to before the turn of 20th century, Leilani (1974) was a brilliant winner of the race and used it as her platform to win the Caulfield Cup a few weeks later.

There have also been a handful of multiple winners of the Toorak Handicap.

His feat was then followed by double triumphs to Desert Breeze (1952, 1953) and Nicopolis (1963, 1964) are the only other horses to have done so prior to Umrum and Solzhenitsyn.

The inside barriers have provided punters with a stack of winners since 1983.

Barriers one to five in that time have produced 14 winning runners.

Of the double figure barriers, number 11 has been the most successful with four winners.

It is a race that is usually run at breakneck speed, so a comfortable barrier that allows for an economical is usually preferred.

The wider have produced winners though.

Should the weather take a turn for the worse, the wider lanes and being draw out wide on the course is often the place to be.

Six of the last 12 Toorak Handicap favourites have crossed the finish post first.

I’m Thunderstruck (2021) was the most recent favourite to cross the line in first place and then went on to win the Golden Eagle.

Horses outside the market have also defied their starting price by winning in impressive fashion with Mr Quickie (2020) paying a handsome 20 to 1 when winning and Fierce Impact (2019) at $19 also springing the surprise.

Incredibly, only three mares since the turn of the century have rocked up and won the Toorak Handicap.

Champion Gai Waterhouse-trained mare More Joyous was the most recent to do so – and she was a freak!

A race put on the calendar for gun milers, the Toorak Handicap can, on the odd occasion, attract some stayers making their way up in distance for the black-type staying races in the spring.

29 of the last 35 winners of this race have either won their previous starts or finished runner-up.

When is the Toorak Handicap held?

The winner and runners in the race may end up going to the spelling paddock with the autumn carnival or summer racing carnival on the agenda.

Many horses who compete in the Toorak Handicap also go towards the Group 1 Cantala Stakes (1600m) at Flemington on Derby Day, or the Cox Plate (2020m), the Mackinnon Stakes (2000m) or even the Group 1 Empire Rose Stakes (1600m) for the fillies and mares.

How To Bet On The Toorak Handicap