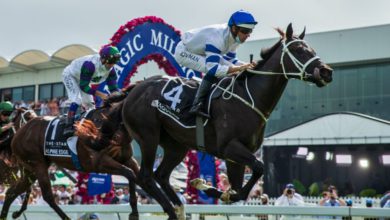 The Magic Millions 2YO Classic (1200m) is run under restricted set weights conditions reserved solely for two-year-old horses who are eligible to enter the race.

With a prize pool of $2,000,000 plus added bonuses, the race represents a huge opportunity for talented juveniles to launch stud and breeding careers.

The race is those fully restricted to horses that have been sold or passed-in at one of the Magic Millions sales across Australia.

The Magic Millions 2YO Classic was part of a massive prize money increase back in 2017.

The raceday became the first card in Australia to amass a total prizepool on the day of $10,000,000.

The inaugural winner of the race back in 1987 was a horse called Snippets.

Since then, a heap of breeding superstars and juveniles have crossed the post in first place.

Let’s start in 1999, when champion Testa Rossa won the race and went on to forge a brilliant career.

Rolling forward, 2004 was the year we saw the first horse ever to do the Golden Slipper-Magic Millions double with Dance Hero achieving the feat.

His winning efforts were then followed up by Phelan Ready (2009) and Capitalist (2016) who both went on to win the Golden Slipper-Magic Millions double as well.

Sunlight is arguably the most famous of horses in the last decade to have collected the winning cheque in the Magic Millions 2YO Classic.

Speed machine Houtzen was also victorious in 2017 and it marked the first win in the race for trainer Toby Edmonds.

Houtzen (2017) and Sunlight (2018) have been the only horses in the last two decades to have won from double-figure barriers.

The inside barriers have had a clear advantage in recent years.

Shauqero (2021) drew the pole in barrier one when darting out and proving too fast for his rivals.

It would pay to keep a close eye on conditions during the day.

If the rain comes, the Gold Coast track can sometimes play up the middle and down the outside which will suit middle to wide-barriers.

The Magic Millions 2YO Classic has been hot with the favourites in the last 12 years.

Fillies have dominated the race in the last five years.

It took two-year-old colt Shaquero (2021) to buck the trend with Capitalist (2016) being the last colt before him to win.

You would probably prefer to be on horses who have handled the clockwise way of going.

Looking at horses with a good level of experience is also a good form indicator.

Since the running of the race, every horse that has won has come into the race at their third start or more.

Winners will usually come from the Group 3 BJ McLachlan Stakes (1200m) or the Listed Phelan Ready Stakes (1050m) at Doomben.

When is the Magic Millions 2YO Classic held?