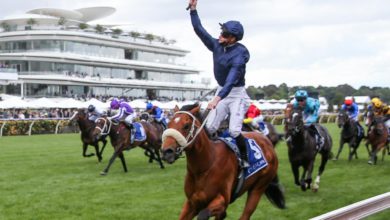 Run over 1200 metres or six furlongs in the old, the straight dash is reserved solely for three-year-old sprinters who possess blistering speed and electric acceleration.

Inaugurated in 1863, the Coolmore Stud Stakes was originally restricted to two-year-olds.

The race features an incredible honour roll as we have seen champion after champion grace the hallowed ground of Flemington from the 1200-metre start onto the course and down to the finish line.

The Coolmore Stud Stakes won only by special juvenile sprinters who can handle the wide, open surroundings of the Flemington straight course.

You can look in so many directions to find great winners and champions gone by in the Coolmore Stud Stakes.

Let us start with none other than bomb-proof sprinter Manikato (1978) who bounded away to win the race for legendary trainer Bob Hoysted.

Zedative (1988), Courtza (1989) and Encosta De Lago (1996) are just some the champions of a bygone era to have dashed to the victory in the Coolmore Stud Stakes.

More recently, since 2004, the famous names have continue to pile up in the winners list of the Coolmore Stud STakes.

Alinghi (2004) scorched home to win the race in what was one of his four Group 1 career successes.

Crowd favourite and punters sentimental elect Weekend Hussler put pay to his rivals in 2007 and gun sire Northern Meteor etched his path to the breeding barn with victory in the Coolmore Stud Stakes in 2008.

Chris Waller has a fantastic record in the race in recent years as well.

Sine 2013, the champion NSW-based trainer has won the race on four occasions.

From an actual pure perspective, one of the more eye-catching and brilliant performances was reserved for Merchant Navy (2017).

The Ciaron Maher-trained sprinter carved an incredible path through the field to nab victory on the line and begin his journey overseas where he was acquired by Coolmore as a breeding stallion.

Winners can come from any barriers up the straight.

It all depends on track conditions and where the best lanes are on the day.

It is bets to keep an eye out on where the best ground is during the day and making your punting decisions based on that.

Barriers eight and nine have provided five winners each since 1983, which is the most of any barrier.

Barrier five is next best with four.

Since 2004, seven outright favourites have won the Coolmore Stud Stakes.

The 2020 winner September Run won the race as a $4 elect with Zoustar (2013) being the most recent favourite to score victory as an outright favourite.

Home Affairs (2021) is the most recent winner of the race and did so after being heavily backed into second favourite.

The Coolmore Stud Stakes is usually targeted by those trainers who possess colts that can go to the breeding barn to begin their stallion careers.

But the fillies have made a good fist of the Coolmore Stud Stakes of late.

Freshening up from the Group 1 Golden Rose (1400m)  and coming down to Victoria for the Coolmore Stud Stakes has proven a successful recipe for three-year-old sprinters.

Home Affairs (2021) won the race after coming from The Everest.

When is the Coolmore Stud Stakes held?

The race will be run and won on Saturday the 30th October, 2021 at Flemington Racecourse.

A lot of the runners in the Coolmore Stud Stakes will usually head straight to the paddock and come back in the Autumn for the VRC Sprint Classic and the Lightning Stakes.

Some winners may even end up retiring and will then head straight to the breeding barns.

How To Bet On Coolmore Stud Staked