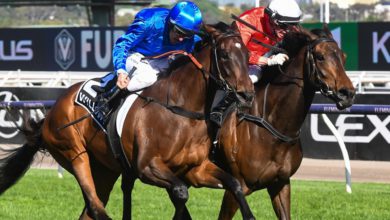 The VRC Oaks is the premier staying event for the three-year-old fillies who are part of the Spring Racing Carnival.

The inaugural running of the VRC Oaks dates all the way back to 1861 with the first winner of the race being Palestine.

A genuine stamina sapping test for the three-year-old fillies, the race is run on the third day of the Flemington Spring Racing Carnival which falls on a Thursday.

The day is usually centred around a focus on the women at the racetrack with Oaks Day being dubbed ‘Ladies Day.’

The VRC Oaks ranks equal first as the most valuable race for fillies in Australia alongside the AJC Oaks and the Queen of The Turf.

Jockeys and trainers have made this race their own in recent memory.

This year, Damien Oliver equalled Bobbie Lewis’ record for wins in the race by claiming his seventh Oaks victory when piloting Willowy to success.

The victory made it the first success in the Oaks for the Godolphin training operation in Australia.

Legendary trainer Bart Cummings is the current record holder from a trainers perspective having won the race an unprecedented nine times.

Faint Perfume (2009) was Bart’s final victory in the race before his death.

Other famous winners of the Oaks include Jameka (2015) who would then go on to become a staying champion by winning the Caulfield Cup the following the year.

Mosheen (2011) bolted in the Oaks in sloppy and heavy conditions, while Samantha Miss (2008) and star filly Miss Finland (2006) were also triumphant.

Melbourne Cup winning horse Light Fingers (1964) also made the race her own.

Barrier two and barrier seven have provided the most amount of winners in the VRC Oaks in the last 38 years.

Barrier two is where 2021 winner Willowy jumped from.

Wide barriers seem to be no issue as well with four winners jumping from barrier ten in this time.

There have been 16 favourites to win the VRC Oaks in the last 38 years with Willowy (2021) being the most recent to do so.

Prior to her victory this year, the John Sargent-trained filly Kirramosa (2013) was the last favourite to win the race.

The VRC is a race restricted to three-year-old fillies.

That said, you usually want to be siding with a filly who has at least had one or two runs in her two-year-old campaign which usually provides a nice platform to catapult into longer distances.

Some fillies will also use the Thousand Guineas as the lead-up to the VRC Oaks.

Willowy used the Wakeful Stakes as her platform to victory in the 2021 Oaks.

When is the VRC Oaks held?

Are there any other races on the day?
How do I bet on the VRC Oaks?
Where do the winners and runners of the VRC Oaks race next?

How To Bet On The VRC Oaks?